The aerospace engineering major is concerned with the processes, both analytical and creative, that are involved in the design, manufacture and operation of aerospace vehicles within and beyond planetary atmospheres. A degree in Aerospace Engineering can lead to immense opportunities in many fields.  Aerospace  Engineering Schools will have you making all kinds flight powered vehicles ranging from helicopters and other vertical takeoff aircraft at the low-speed end of the flight spectrum 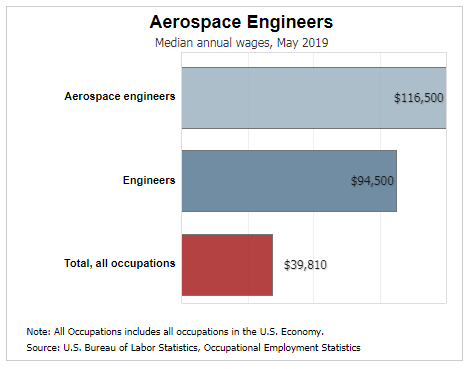 The aerospace engineer is concerned with the processes, both analytical and creative, that are involved in the design, manufacture and operation of aerospace vehicles within and beyond planetary atmospheres. These vehicles range from helicopters and other vertical takeoff aircraft at the low-speed end of the flight spectrum, to spacecraft traveling at thousands of miles per hour during launch, orbit, tranplanetary flight, or reenty, at the high-speed end. In between there are general aviation and commercial transport aircraft flying at speeds well below and close to the speed of sound, and supersonic transports, fighters, and missiles which cruise supersonically. Although each speed regime and each vehicle poses its special problems, all aerospace vehicles can be addressed by a common set of technical specialties or disciplines.The subdisciplines of Aerospace Engineering are: aerodynamics, flight dynamics, propulsion, structures, and "design". Aerodynamics addresses the flow of air and the associated forces, moments, pressures, and temperature changes. Flight-dynamics addresses the motion of the vehicles including the trajectories, the rotational dynamics, the sensors, and the control laws required for successful accomplishment of the missions. Propulsion addresses the engines which have been devised to convert chemical (and occasionally other forms) energy into useful work, to produce the thrust needed to propel aerospace vehicles. Structures addresses material properties, stresses, strains, deflection, and vibration along with manufacturing processes as required to produce the very light weight and rugged elements needed in aerospace vehicles.Source: University of Maryland:http://www.aero.umd.eduAeronautical vs. AstronauticalAerospace engineering is a combination of aeronautical and astronautical engineering. AE is the engineering associated with atmospheric flight (which includes aircraft, helicopters, missiles) or even automobiles. The same principles of aeronautical engineering would apply to any fluid medium – such as water. Astronautical engineering is the engineering of space missions, which also covers a large number of topics.Source: Embry Riddle: http://www.erau.edu